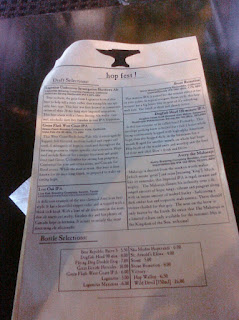 If you've been reading my blog or following my twitter feed, you've probably heard me talk about Anvil Bar and Refuge. Its the new 'it' place it seems, down on Westheimer. A place that has become known for making amazing cocktails mostly pre-prohibition style, all fresh ingredients, with things like homemade bitters and syrups. These cocktails take time to make, so don't expect to order and quickly get your drink. There are no dispensing guns behind the bar, everything is hand made and shaken by the bartenders. This takes time, but don't fret, you'll learn something while waiting.
In addition to cocktails they also have a passion for great beer, an in fact I wrote not to long ago about their new draft beer list. A lot of folks have been reviewing it lately and saying great things, but I wanted to wait. Why you ask? Well when they first opened, while they had a great beer list most of it was on bottles. Then as mentioned above they got their new draft beer system in, so I gave them some time to get in the grove before putting together an "official" review. Well that time is today. Yesterday Anvil hosted a Hopfest, celeberating all
Newer Post Older Post Home
Subscribe to: Post Comments (Atom)