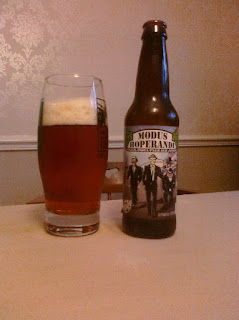 This beer comes from yet another brewery new to the Texas market. I have to admit its getting pretty fun seeing all the new breweries coming into this state. Ska (yes its named for Ska music which the owners were/are big fans of) is from Durango, CO and is actually not a huge operation so its nice to see them come here. They even can some of their beer! Their beers have some pretty nice labels on them, and their is an interesting story behind them as they represent characters in mob style comic world they created. We don't currently get their entire line up, so far getting their Blond, and Red Ale, and now their IPA. Hopefully their Porter and Imperial Porter will be coming soon.
The Beer: This particular beer is Ska's IPA and weighs in at 6.8% and 65 IBU's. It pours a deep amber orange color capped by a dense thick slightly off white head. The nose is of huge hops, piney, citrus-y, pale toasted malts, and again wave on wave of hops. The mouthfeel is creamy, slightly chewy with a bitter explosion of hops across the tongue, grapefruit peel, a bit of caramel, toasted malt mildly spring up at the finish before being over whelmed by the hops again at the finish. The tongue is coated in a hoppy resin film, flavors of orange creamcicle. Plenty of lacing left on the glass when I'm done. This is wonderful beer, that seems more bitter and more citrusy than its listed IBU's. This one gets an A- from me. Here's what the folks at BA had to say.
Posted by Barleyvine at 6:34 AM

Who is distributing this beer?
Thanks,
Chad