The Brewers Association which tracks these kind of things have released numbers from last year. With regards to straight dollars sales by craft brewers were up by 10.5 percent, and 5.8 percent by volume. However compare to last year which showed 16 percent by dollars and 12 percent by volume. You see that while it was a good year, it was not a great year compared to the past. However looking on the bright side it shows that even in the hard economic times that the last half of the year brought, folks were still buying craft brew. See below for a chart provided by the Brewers Assocation showing Craft beer growth over the year. What you'll see again is an increase over last year, but not as big as recent yearly increases, but still going up. What does this mean? Does it mean that craft beer is recession proof? I don't think so, not yet anyway. I'd have to see the numbers from the first quarter of this year before believing that statement. What it does show is that while big brewers have been losing an audience, craft brewer's continue to grow. 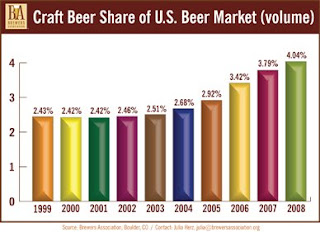 Posted by Barleyvine at 6:02 AM