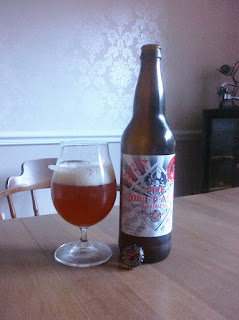 A month or so ago a friend of mine went up to Seattle where they departed for an Alaskan crew. While she was away she asked me and my wife to watch her house, water her plants, etc. As a thank you they cooked us dinner, and brought back some beer's from the Seattle area. This one from Pike was one of them. Now we get most Pike beer's in this area, but not this one, its special brew so I was pretty excited that she thought to pick it up for me.
The Beer: This one weighs in at 8% abv and 80 IBU. It pours a cloudy orange with a good sized off white frothy head. The nose is of grapefruit and citrus peel, biscuity, marmalade. The mouthfeel has lots of carbonation, citrus peel, creamy. Orange marmalade on toasted biscuits, apricots. Lots of tongue saturating bitterness with just the right amount of balance. A tasty beer, wish it was down here. This one gets an A- from me. Here's what the folks at BA think.
Posted by Barleyvine at 7:04 AM