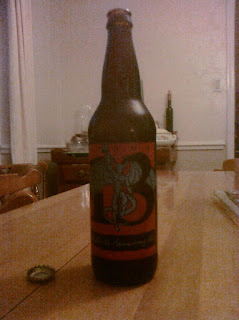 You know I like me some anniversary beers. Whatever it is, the breweries seem to do a really good job with these beers. Stone is no different with their 13th Anniversary brew. This is the first one we've gotten in Texas and from all reports its flying off the shelves at the local stores. This beer is an Imperial Red Ale. So I would expect lots of hops with some strong maltiness.
The Beer: This one weighs in at 9.45% and pours a dark amber with bright red streaks shining through. Capped by a dense head of cappuccino colored foam. Hops citrus peel, grapefruit, biscuits, malt and caramel all on the nose. Mouthfeel is chewy, creamy, hoppy, resiny. There are notes of dark rye bread, pine, woodiness. When it warms a bit I taste raisins, dark dried fruits, and an earthiness. Its very bready, malty. However all these flavors take a back seat to the hops (as expected). They are all there of course but lay under a thick blanket of resinous hops. Very nice. This one gets a B+ from me. Here's what the folks at BA have to say.
Posted by Barleyvine at 6:26 AM